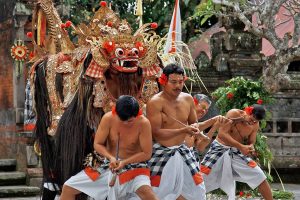 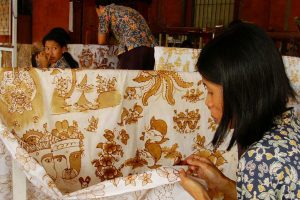 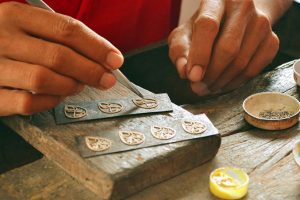 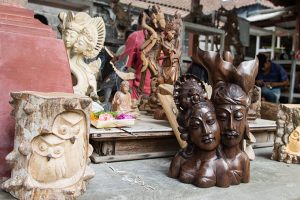 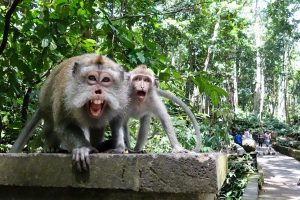 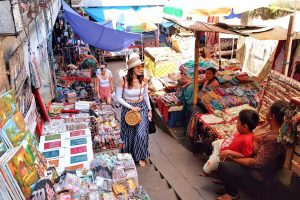 First stop at Batubulan village to see the Barong and Kris Dance, a dance depicting an eternal fight between good and evil spirit. Barong is a large lion type creature played by two men representing of good spirit meanwhile Rangda which is with long fingernails and droopy breasts symbolizing the evil spirit. At the end of this story, a battle between good spirit, as a symbol of Barong and Rangda as a symbol of evil spirit. Nobody wins in this fight, finally dancer trance and stab himself with the hash but not until the wound.

Tohpati Village is located east side of Denpasar city, this village welknown for Batik Village. Most of the villager here making batik,process of making batik you can observe also here. There, batik making has evolved to become one of the greatest art forms of Asia. This ancient technique involves using a wajan similar in shape to a wok for melting wax, and a canting, a wooden-handled tool with a metal tip for applying wax to create the design.  You can shop for your favorite paintings batik like clothes, sarung, pilow case, photo of batik painting.

This village is located strategically on the main road form the Denpasar to Gianyar Regency which is about 5 km from Denpasar Town. CELUK Village is the famous village in Bali as a tourist destination cause of the local residents is very proactive and full of innovation to the gold and silver crafting and owns the individuality and excellence in production of gold and silver crafting. Most of them are Balinese professional, artistic and skillful of design development related to the silver and gold crafting.They create many elegant designs, which are greatly influenced by local tradition.

One of villages in Bali fundamentally identified as an artistic countryside by focusing in artistic of wood carving. Mas village is located in Ubud sub district and Gianyar Regency, east part of Bali. It owns the typical style of wood carving art by placing forward the distinguish synergy the humanism and naturalism. The village’s popularity as an art village is famous in the national and world level which is not forgetting from the highness name of some maestros which has born and found the spirit (taksu) and soul.The result of wood carving art in this village owns the immeasurable and wide dimension like idol for the devoting (arca idol), representative dimension of everyday Balinese social society life (farmer, fisherman, worker, intellectual, merchant etc), the abstract dimension as existing of actor imagination which is listening carefully of reality, dynamics and life philosophy.

In According with the Balinese bilief,They treat every object as a human being, including the planning and lay – out of their house compound. The compound is basically divided into three parts on which part they build structure of different purposes.Applying the directional concept of their traditional compass,holy structures are built at the mountain at the mountain – wards of the compund such as shrinnes ( head ), in the middle yard are built all structures of living quarter ( body ), and at the seawards are kitchen,pigsty and remaining land where they usually throw rubbish away. we can see artist painter who paint on canvas.

Ubud Monkey Forest is a small rain forest dwelt by some group of monkeys and other tropical animals. It is strategically located in the hearth of Ubud, precisely located in the region of Padang Tegal Village, Ubud Sub district and Gianyar Regency. Monkey Forests in Balinese language called Wanara Wana are spread out in the island and Ubud Monkey Forest itself own very important function of the continuity the monkey habitat in Bali. Ubud Monkey Forest is dwelt by 200 monkeys, pertained to long tail inclusive macaques or macaca fascicularis group which owns the wide disseminating area. Among the amount monkeys living in this forest, there are 23 adult male, 79 adult female and 98 still baby. All the monkeys in this forest consisted of three groups, dwell certain area and use the certain place and certain time. However, it also happened that entire group can use the forest and whenever two groups are existing at same place and time, they will fight each other. These monkeys are believed as Gods Guard of Dalem Agung Temple, The Hindu Temple exist in the middle of forest.

where the existence is not far different from other markets available in the tourism area.This market as a society economics center of Ubud and it is apposite to the existence of Ubud Empire that is called Puri Saren. The market is unfolding from west to easterly divided become two group with different purpose. There are two markets available at the same area those are one block at the Westside is for a traditional artistic market and another block located in the east as an everyday traditional fundamental market requirement. This market is opened every day about at 08:00 until 18:00, even some from them still open until nighttime. While the traditional market for the fundamental requirement is opened everyday at 06:00 – even before that there is morning market started at 04:00 morning.

Ubud Palace is an Ubud Kingdom Palace with beautiful Balinese traditional houses as a residence of Ubud King. It is set in the center of Ubud with traditional art market just in front of it and it is found by Ida Tjokorda Putu Kandel who has commanded from year 1800 – 1823. This palace is an artistic cultural life center, while the traditional market is the symbol of local economics resident. The existence of Ubud palace is equipped by a Wantilan/auditorium that is a large building of meeting room and a banyan tree as shelter place at the daytime. The traditional market is the place of society economics and its existence is always border on palace as artistic cultural life center. It means that the both pole meeting is describing the dynamics of society and kingdom life.